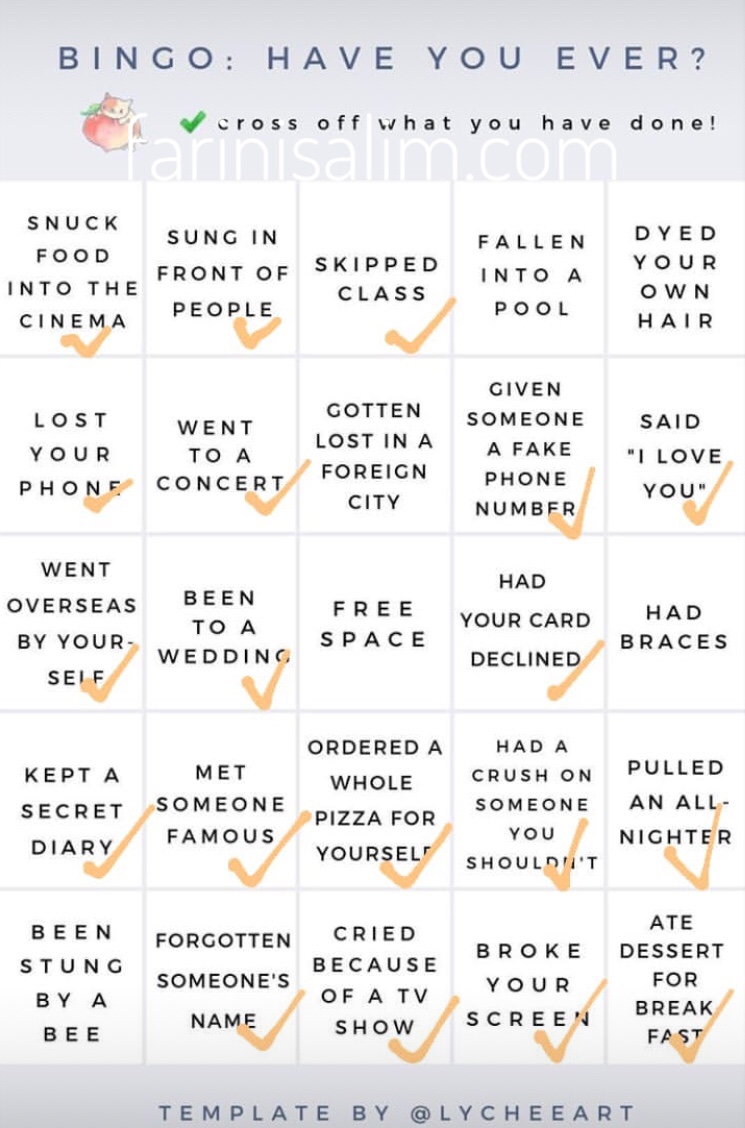 My sister did this on her instastory and I think it’s fun. The ticked ones are her answers. And since I have a few hours more to spare before mock-up comes in, I will quickly write down my answer here.

Snuck food into the cinema – I have no memories of this, but maybe at one point I did. I don’t know. Lol.

Sung in front of people – Yes. And I did more than just those patriotic song choir at primary school. This is legit singing and dancing, I will only tell you if you ask me personally.

Skipped class – I believe I never did this. Not without the teacher’s consent. But oh wait! There were times in lower secondary when we would go practice caklempong just so we don’t have to attend a class. Lol.

Dyed your own hair – Nah. I love my original hair too much.

Lost your phone – Yes. Multiple times. Many times I got it back. One time I didn’t.

Went to a concert – Varsity concert, yes. But I didn’t sit among the crowd. The concert was hold at the field and the building that housed our varsity badminton court is by the hillside overlooking that field. We sat at that hill watching down.

Gotten lost in a foreign city. – Yes. Lol. But I quickly find my way back. No worries. It’s Seoul.

Given someone a fake phone number – this I cannot remember. But maybe there weren’t many people asking for my number to begin with.

Said “I Love You” – yes. This morning. To Heartbeat as I left for work.

Went overseas by yourself – somewhere isn’t Korea that I went on my own is Japan. It felt just like Korea. Haha.

Been to a wedding – Yeah. Lol. My kids attend them as young as 2 months(?)

Had braces – No. And I find that I am blessed with good teeth and I am immensely grateful about it.

Kept a secret diary – Ishh when you have four sisters, you diary don’t get to be a secret. Although now that I speak four languages I could just write in a language they don’t understand. Ha ha ha.

Ordered a whole pizza for yourself – Yes. It’s my favorite choice of dinner when my husband isn’t around. When else do I get to eat Dominos double-decker cheese burst crust pizzas?

Had a crush on someone you shouldn’t. – Um I believe we all had that at one point in our lives. I had multiple. Ha ha ha ha!

Pulled an all-nighter – Nah, I ended up dozing off at the couch outside the varsity library. Apparently not-sleeping isn’t my thing. So isn’t late-night movies and its likes.

Been stung by a bee – Oh yes! Twicee! The first time, I didn’t even notice I got stung. I was in primary school and felt my back hurt and my then best friend, Dina, helped took a look and pulled out the sting from my back. She’s a doctor now. I must be her first patient. Ha ha. Oh but wait, I don’t know if that’s really a bee because I don’t exactly see a bee. But I got stung by something. Lol whatever.

Forgotten someone’s name – A LOT! I’m bad at names especially if you are a male. Lol. I only got to remember the names of my entire batchmates when we were already in Korea.

Cried because of a TV show – YES. *no shame*

Broke your screen – what screen? Phone screen? No. TV screen? No, but I broke a lot at work. Windscreen? No.

Ate dessert for breakfast – the other day I had Kara-Melo at breakfast and the girl who owns the brand looked at me incredulously. Girl, don’t sell if you won’t let people eat, please.

Well, I hope the above made your day. There isn’t any tagging to begin with but I will tag because I would like to know a bit more about you too.

View all posts by farinisalim